They were all born there!

Sharonville is not only the glamour model’s birthplace, it’s also where seven Sears kit homes were born, including; two Sears Sunbeam models, a Sears Vallonia model, a rare for Cincinnati Sears Princeville model, a Sears Kilbourne model, and a model that looks like it may be a Sears Westly model.

There’s also supposed to be a Sears 123 model (according to one of the Sears Modern Home Catalogs) but we haven’t been able to find it yet. Hopefully it’s still standing and wasn’t torn down to make way for a fast food joint or gas station! If any of you readers happen to know where this home is, please let me know!

Here’s a look at the Sears models we’ve found in Sharonville.

This home on Creek Rd. is a Sears Sunbeam model and was built in 1915. Sears billed it as “A five room modern bungalow with open air sleeping porch.”

Imagine my surprise when I was cruising Sharonville streets looking for the Sears 123 model and saw this unusual gem on Hageman. It’s the Sears Princeville model, originally offered as Modern Home No. 173.

And here we have the Sears Fullerton model. This one is currently serving as the home to HomeWell Senior Care. The Sears Modern Homes catalog offering below boasted a price of $2243 on the Fullerton and said “This style of home has become very popular. It adapts itself equally well to city lots or country estates, and in few other styles can you get so much space for such a small outlay of money!”

Well now, what have we here? Could this be a Sears Roebuck Westly model?  Some photos from a recent listing show a few things are off (fireplace is not tucked in to a corner, left side of porch is modified)  Hmmm. I’m not 100% sure, but there are enough things correct that I’d be willing to vote for it as a modified Westly. What are your thoughts?

This sweet little home on Oak Ave. is the Sears Elsmore model and was built in 1920 with 2 bedrooms and 1 bath. Sears billed this cute, little house as “A popular, inexpensive and graceful bungalow, well lighted and ventilated. Large porch, with bungalow columns and porch rails.” Sadly, much of the original detailing of this home has been wrapped in siding and is no longer visible. 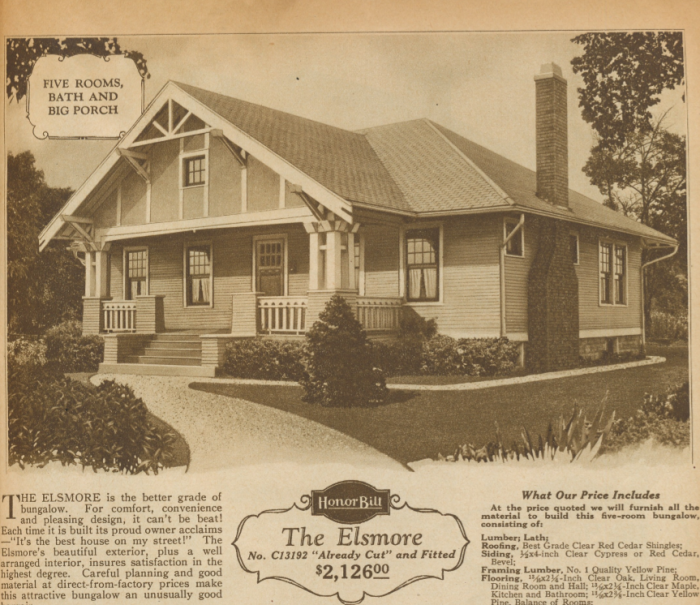 Well, how do you like that? Another Sunbeam model. This one is at 11173 Main St. and still has a lot of it’s original building features intact. Amazingly, the siding contractors haven’t gotten their hands on this one yet (and hopefully won’t) so you can still see the distinctive 5 piece knee brackets and original wood siding.

Ooh la la! A Sears Kilbourne model done in brick – an absolute sweetheart. According to the county auditor, this one was built in 1930. The Kilbourne was billed as “a house that looks as well outside as it is planned inside.” It surely does.

This blog post by Laraine got a few comments from other Sears House lovers.  Here they are.

Cindy Catanzaro – Love this group of houses! Nice spot on the Fullerton. It has the original pillars! I drove right past that house last time I was in Sharonville, and never looked at it twice. BTW, there is a Cornell model up the hill behind the second Sunbeam. I’ll bet there are more to find! Like that No. 123.

Reply by Laraine- Cindy – Oh that 123 model is driving me berserk! I swear I’ve been up and down EVERY street in Sharonville. Maybe I’ll go over to the Historical Society and see if anybody there has ever seen it.

Reply by Laraine – Sure looks like one, doesn’t it?

Follow up to the possible Sears Westly at 11121 Spinner Ave.  Yes, it is one.  The house was recently documented with a mortgage record, meaning the house kit was financed through Sears Roebuck.

Here’s an image of the Sears #123 that was listed as being built in Sharonville in early Modern Home catalogs.  If you spot it, please leave a comment! 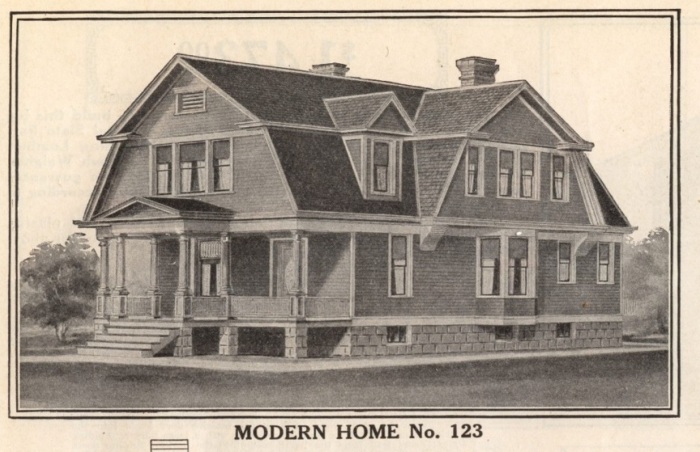 This post was originally published by Laraine Shape on November 26, 2013

The other day I was zooming down GlendaleMilford Rd. when I spotted a cluster of porch pillars out of the corner of my eye. A Sears house!

Turns out it’s a beautiful SEARS Roebuck Elsmore model complete with distinctive 5 piece eave brackets, original porch rail and Sears front door. SWEET!  Definitely no mistaking this one. It’s the real deal. Another one recently came available for sale in Wyoming and sold very quickly. In 3 days to be exact and for $2000 more than asking price.

The Elsmore was billed by Sears as ” a popular, inexpensive and graceful bungalow, well lighted and ventilated.”   Click here to see the original catalog image of this home.

Unfortunately the owner wasn’t home when I stopped to take pictures. Maybe next time. I’d love to see the inside